My passion for painting came early for me. I was one of those kids who knew what he wanted to be at the tender age of nine –  I wanted to be an artist. Tutoring by landscape artist June Kelly from that age until high school gave me classic color training as a foundation for my love of drawing and painting. Throughout school I lived in the art room, capping off my scholastic years by graduating with a BA in Fine Art from Southern Illinois University at Edwardsville. I was fortunate to paint like crazy and do several commissions and murals during these years.

I got a decent job doing commercial art & design at AT&T after graduation. The next few decades were a learning curve of graphic design, pre-press, four color print, product development, photo direction, illustration, display work and yes eventually all that production rolled into the Macintosh. I witnessed the entire graphic and film industry evolve into the new digital platform. As computers and software grew more powerful and more capable, so did the work I was able to do. It was truly an honor and a wonder to experience first hand that revolution.

It wasn’t until the late 90s that my fine art and my digital worlds collided on the desktop. The Digital Fine Art I created was surreal. It was a period full of exploration and learning. I used Photoshop to orchestrate imagery from vector, 3-D modeling and paint programs to produce multi-layered visual extravaganzas. I won a number of digital art awards and exhibited at MacWorld Expo in San Francisco among other computer art venues. A couple of galleries gave the work a showing. It remains, for me as creative and expressive a media as I’ve worked in. The digital art was successful in computer circles, but not as well received in the fine art marketplace. Today I still produce digital art, but primarily for my commercial endeavors such as the clothing designs for YuYuMee, my Etsy Store.

Transitioning from digital art back to traditional media happened between 2007-10 or so. Ultimately, I started to miss working with oil and canvas. I’ve always loved hiking and rafting the Grand Canyon, so I started with Grand Canyon paintings. If you’ve ever hiked into the Grand Canyon you would know that backpacking limits what you can carry to water, food and essentials, so I worked from my own photos and sketchbook. (A camera and sketchbook is so much more manageable than plein air gear.) Some Canyon prints and original oils were sold, a few won awards, and one was accepted into the Water in the Desert Exhibition 2019 at the Phoenix Airport Museum.

I branched out into other subject matter. I got into pallet knife paintings of classic motorcycles, wildlife and some crazy desert animal acrylics. I am an admitted people watcher so I took that idea to heart with a series of oils of music festival goers. I took long lens candid photos of people in the crowd. People are depicted being themselves – interacting, gazing off, laughing, mesmerized by their phones, some lost, and all oblivious to my camera. In these paintings I tried to capture the changing sunlight on a big party.

I approached a gallery with those festival paintings and they really liked them. However they explained the gallery never had much luck moving figurative art. Encouraging but no cigar. They were kind enough however to tell me “go paint some abstracts then come back and see us”. Well, I did.

Painting abstracts required me to reach inside to search for my subject. It is a leap into the intangible. Then the realization hit me, for years I had been painting to please other people, a vestige from my commercial graphic art years, perhaps. I was ignoring what was in me by always painting something I thought people would like. Painting abstracts has me painting for me for a change. I am really enjoying this new freedom. Oddly enough, I think people like the work too. 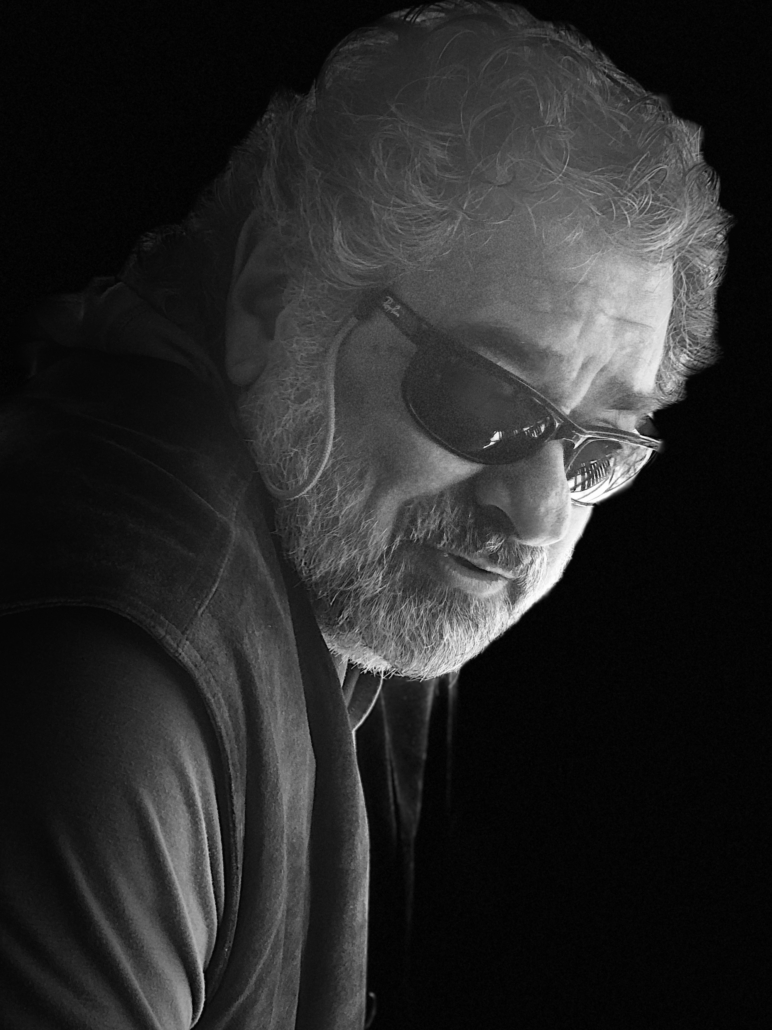